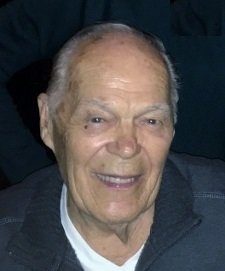 Robert J. Pittman of Depew March 6, 2021; died peacefully at home surrounded by his loving family. Born in Buffalo in 1930, he attended Seneca Vocational High School and served in the US Army 1951 to 1953. At 16, while delivering groceries on his bike, he met the love of his life, Kitty (Kathleen); sharing their late teen years roller skating, jitterbug dancing, and driving a car with a rumble seat. They married in 1952. His career started at Twin Coach and later Twin Industries as a Forman managing the Tool Crib Department. He retired in 1993, after 21 years managing the Water Department of the Village of Depew. He was an active member of the Knights of Columbus Father Justin Council 5670 and communicant of St. James Church. Bob’s passion for the outdoors was his motivation to meticulously care for his lawn, gardens, home, and cars. Always having a daily project and finding something needing repair. As a young man he learned to hunt with his father and brother in the southern tier and introduced country life to Kathleen, on land they owned in East Otto. He played baseball and basketball in his youth and was an avid bowler in multiple leagues for many years. A dedicated fan of the Buffalo Bills, Yankee’s, and Syracuse Basketball; exchanging sport stats while texting to his grandsons. We will remember him hosting many family and friends at his home enjoying the pool, card games, grilled food, laughs, and a beer or two. He is also known to start each day with his morning newspaper, listening to the radio, love for his country, displaying American flags, and watching old Western TV shows. He considered himself a “jack of all trades, but a master of none”. His family thinks otherwise; and will sorely miss this wonderful, wonderful man, father, and grandfather. Survived by his beloved wife Kathleen (nee Santercole) Pittman; devoted father of Denise (David) Adamsen and Lori (Rick) Manning; cherished grandfather of Erik (Justine) Adamsen, Leah (Aaron) Curcio, Kreg (Michael) Adamsen; loving greatgrandfather of Jared and Blake. Also survived by Sister-in-Law Joyce Terrana, nieces and nephews. Robert was predeceased by his parents Clinton and Irene Pittman, brother Clinton Pittman and sister Patricia (Richard) Rozdecki. Private Services were held. Those wishing may make memorials to Hospice Buffalo, Inc.

Share Your Memory of
Robert
Upload Your Memory View All Memories
Be the first to upload a memory!
Share A Memory