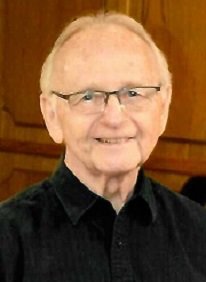 Please share a memory of Michael to include in a keepsake book for family and friends.
View Tribute Book
Michael J. Lorka Jr. (aka Mike, Mike, Mike) died on January 17, 2021 from COVID-19, He was 77. Mike was born and raised in Buffalo, NY where he excelled in smoking cigarettes, hanging out on street corners and being cool. He loved fixing things, and after graduating from vocational school as the Most Handsome in his class, he took a job with Western Electric as a machinist. There, he met Patricia Ann Wandzioch. He drove her home from work in his 1963 red Chevy Impala convertible, and that was that. They married in 1964. Mike and Pat had three children and moved first to Omaha, Nebraska and then to Phoenix, Arizona, where he continued to work for Western Electric (now AT&T). He was a devoted father who taught his kids how to fish, whittle, throw a ball and cheer for losing football teams. He retired from AT&T and moved to Payson, Arizona with Pat , where they built their dream home. Mike didn't like being bored and continued to work past retirement. He volunteered for Payson Search and Rescue and he worked both for Gila County Probation Department and-up to his death- as a baliff for the Payson Jail. He enjoyed wearing a badge and pants that made him look important (ones that had lots of pockets). Mike was a friend to everyone he met, unless they weren't a Buffalo Bills fan. He was charming and kind and thought he was really funny. After Pat died, he became a Payson socialite and was a regular at Chili's, the gym and Walmart. He loved to dance and spent his Sunday evenings sweeping all the girls off their feet at the Buffalo Bar, where he had his own stool and a mug of beer with unlimited refills There will never be another one like him and he will be greatly missed by everyone who knew him. The Bills will probably win it all this year. Mike is the Beloved husband of the late Patricia (nee Wandzioch) Lorka; Devoted father of Alisa Zells, Holly Lorka and Michael (Ashley) Lorka; Loving grandfather of Mason; Dear brother of Leonard (Beverley) Lorka, Mary Ann (David) Dommer, late Walter (late Dorothy) Lorka, late Norbert (Betty) Lorka and late Eugene (late Patricia) Lorka; Also survived by nieces and nephews. Relatives and friends are invited to a Memorial Mass in Holy Mother of the Rosary Cathedral 6298 Broadway, Lancaster Saturday March 20 at 10 AM. Please understand that face coverings must be worn and six foot distancing will be observed. Thank you for your understanding.
Saturday
20
March

10:00 am
Holy Mother of the Rosary Cathedral
6298 Broadway
Lancaster, New York, United States
Please understand that face coverings must be worn and six foot distancing will be observed. Thank you for your understanding.

Share Your Memory of
Michael
Upload Your Memory View All Memories
Be the first to upload a memory!
Share A Memory